Published on 22 juli 2019 by Valgeir Gudbjartsson 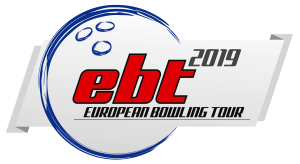 Arnar David Jonsson from Iceland won his second tour stop ever, when he defeated Nicole Sanders from Netherlands in the final of the Track Dream-Bowl Palace Open by Erdinger.

The tournament, which was conducted in Dream-Bowl Palace in Unterföhring, as the 8th stop in the European Bowling Tour 2019, attracted 233 athletes, that competed for the 48 spots in the final steps on the 21 July.

In Step 5 then following were the 4 players qualified from the earlier steps:

Oliver Morig and Jesper Agerbo were eliminated in stop 5 which ended as follows:

And finally, Arnar David Jonson became the winner of the Tournament:

We did not see any changes in the women’s division of the tour as Anna Andersson from Sweden is leading now with 558 points in front of her countrywoman Jenny Wegner with 477 points, Cherie Tan from Singapore is at 3rd place with 475.